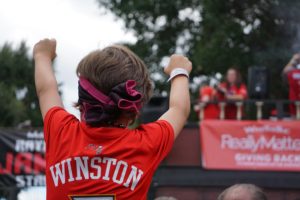 How valuable is Jameis Winston to the Buccaneers?  Most Bucs fans understand that he is incredibly valuable, but few realize just how valuable Jameis is.

When you think about young quarterbacks that start in the NFL the first two that come to mind might be Carson Wentz and Dak Prescott.  They are rookies right out of college so they are the youngest, right?  Surprisingly this is simply not correct.

Who are the two youngest quarterbacks starting in the NFL?  The answer is pretty exciting.  The youngest is Marcus Mariotta at 22 years old with Jameis just behind him also at 22 years old.  After that at 23 years old are Carson Wentz followed by Dak Prescott and then Cody Kessler.

Carson Wentz and Dak Prescott started out looking invincible, but let’s discuss these two compared to Jameis.  Let me warn you in advance though that this will not be a homer article, but rather it will be as impartial a view that a fan like me can offer.

When a young quarterback starts their first season they are an unknown commodity.  There is no real film for a defense to study on this quarterback.  They are a new player on a team that is obviously making changes.  This is one reason that young starting quarterbacks can look fantastic and then they fall to the dreaded “sophomore jinx”.  It isn’t a jinx at all.  It is simply that defenses now have a year of film to study and they know a little bit how to prepare for that quarterback.

For some quarterbacks like Carson Wentz this reality does not take a complete year.  Reality begins setting in after a few games and that great streak of never turning the ball over crumbles when the opposition, which is filled with talented players, has the opportunity to prepare.

Dak Prescott is in a unique situation. He is on a team with a fantastic (possibly best in the NFL) offensive line.  He is not asked to carry the team on his back.  He has a great rookie running back right next to him.  He is in an idea situation.

Jameis is younger than both of these quarterbacks.  Jameis has great fan appeal with both young and old and it is growing.  He has been asked to shoulder a much greater load and has been asked to perform at a much higher level.  Teams have a full year of film on him to study.  His top RB, Doug Martin, is out injured.  He lost his supposed top tight end in ASJ.  What has he done with that situation?  He positioned the team, at .500, to compete with the division leading falcons.

I learned years ago about “Perceived Value”.

Perceived value is the worth that a product or service has in the mind of the consumer. For the most part, consumers are unaware of the true cost of production for the products they buy; instead, they simply have an internal feeling for how much certain products are worth to them.

This certainly applies to Jameis.  Does Jameis ACTUAL value match the  PERCEIVED value that many fans have for him?

In one year Jameis will be as old as Wentz and Prestcott.  He will have two full seasons under his belt and the team that was to be built around him will be well on its way to fruition.  Complete?  Probably not. He will be miles ahead of Wentz and Prestcott when it comes to knowledge of the game.

Jameis is a special commodity.  In one year he will have the future of Wentz and Prestcott with a solid history behind him.

Marcus Mariotta is younger.  He too will be in the same situation as Jameis, but things don’t look quite as bright in Tennessee.  He seems like a solid, maybe even good, quarterback.

That feeling you have as a Tampa fan…what is it?  It’s called “hope”.  It’s been a while since we have had reasonable hope for a future of success.  Right now we have that hope.  We have it simply because we have a great quarterback…and we have him for a very VERY long time.

At least that is how I see it from the cheap seats.

Bucs fan since 04/24/74. Professional photographer with sports experience ranging from work with Pro-football weekly, NBA Courtside Magazine and more. My work has been seen on the pages of national publications from Maxim, Marie Claire, Ocean Drive, ESPN Magazine, Teen Vogue and many others. I photographed the Atlanta Falcons Cheerleaders Swimsuit Calendar for a few years as well as the Cincinnati Bengals Cheerleaders Swimsuit Calendar. I have started a charity called Warriors Eye which is the passion of my life. www.warriorseye.org Warriors Eye is dedicated to helping our returning heroes that need help adjusting to life at home through the use of photography.

The Tampa Bay Buccaneers have not done well traveling to the west coast and this game against the San Fransisco 49ers was different. Very, very different. The Buccaneers were down 14-0 early on in the game but were able to...

After Further Review – Buccaneers vs 49ers

After a scary start that is apropos for Halloween, the Buccaneers woke up from the dead and thrashed the horrid San Francisco 49ers 34-17.  It was a great three quarters of football for the men in Pewter, but what about...