It’s desperation time for the Tampa Bay Buccaneers as they begin division play in the NFC South. If the Bucs hope to get back into the playoff race, they must win their division games. They need to keep the Panthers reeling.

Vernon Hargreaves III has had a terrible season for Tampa Bay. Unfortunately, the Bucs are forced to put VH3 back into the starting lineup after injuries to starters Brent Grimes and Robert McClain will keep them out this week. Hargreaves had his best game of the season against Buffalo, playing a much more aggressive style. If the Bucs coaches allow the former Gator and First Round pick to play aggressively and with his instincts, the Bucs may be able to navigate these troubled waters. If not, it could be another long day for the defense.

Luke Kuechly is back for the Carolina Panthers. The All-Pro Middle Linebacker was once again out with a concussion and considering the number of times it’s happened, it’s got to be a growing concern for the player and the organization. The Panthers defense is pretty darned good with or without Keuchly but having his talents available will make things a little more difficult for Jameis and the guys.

When the Bucs Have the Ball

Tampa Bay has the second-ranked offense in the NFL and has the league’s top passing game, but it’s the running game that will be crucial in this one for Tampa Bay. They have to protect their beaten up and demoralized defense and the best way to do that is to keep the football away from the Panthers’ offense. Doug Martin and the running game will be huge. Extending drives for 10 or 11 plays will be even more important. Of course, Winston has to avoid the turnovers and no team has forced Jameis into more mistakes than Carolina.

The Bucs offense will put up points, but they need to help their defense by playing complimentary football.

When the Panthers Have the Ball

As Cam goes, so goes the Carolina offense. Newton hasn’t been very good the last couple seasons. This year his completing more passes but already has been picked off 10 times and fumbled 5 times on the year. Of course, the Bucs need to get pressure on Cam to force him into a drive-killing mistake. The Bucs also have to figure out a way to get off the field on 3rd down. Tampa Bay was one of the best teams in the league in third-down defense last season but this year they’re among the worst.

Simply, the Bucs must find a way to keep Carolina off the scoreboard while allowing their offense to take over the game. They’ll need to steal some possessions with turnovers and get off the field on third-and-long situations.

Watch out for Christian McCaffrey. The 2017 first round pick is due to have a breakout game. The Bucs need to make sure it’s not against them.

Weird Facts That May Only Be Interesting to Me 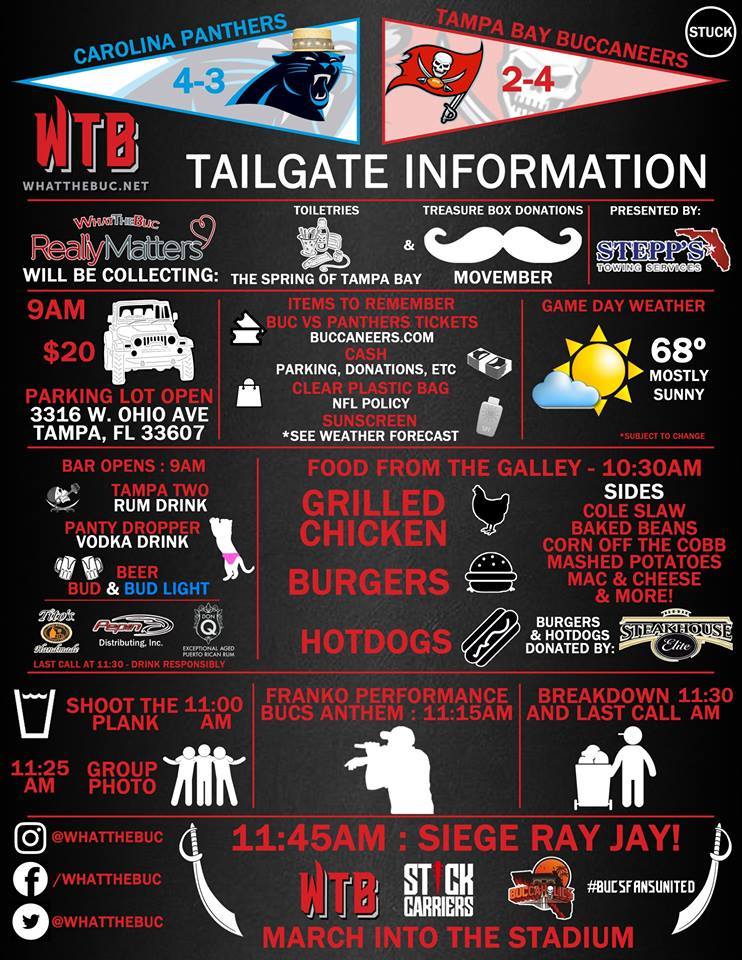 The Bucs free fall continued to 2-5 as this gut-punching season seems to crumble before our eyes. Tampa Bay lost to the division rival Carolina Panthers in the worst of fashions. They were pushed around, dominated on both lines of...

IT’S NOT OVER YET, BUCS NATION!

Yes, I know that I said the same thing last week about the Bills game. I still say it was. It's even more so for this week's game now. The Bucs are 2-4 going into this NFC South matchup against...