Jason Licht’s offseason overhaul of the defensive line started with a couple of surprise free agent signings. One was former Eagles defensive tackle Beau Allen. The other was former Bears defensive tackle Mitch Unrein. I say surprising only because most Bucs fans, including this one, we’re looking for the team to sign one of the so-called “big name”  free agent d-linemen on the market like Ndamukong Suh, Sheldon Richardson or Dontari Poe. Instead, Jason Licht went with two guys that most of us had to Google to figure out who they were. It’s a new tactic for Licht. It’s a bold tactic for Licht. But the other way hasn’t worked in the past, so maybe it’s time for a change. Not going after the “best players”, but going after the “right players”.  Unrein could be one of those “right players”. The Bucs are hoping so after signing him to a 3 yr/$10.5 million contract with $4 million of it guaranteed.

Hailing from Eaton, Colorado, Unrein is the youngest of six kids and comes from an athletic family. His brothers Mark and Michael played college football at the University of Northern Colorado. His sister Natalie was a three-time All-American swimmer at the University of North Carolina. His cousin Terry played defensive end and was drafted by the San Diego Chargers in the third round of the 1986 NFL Draft. And both Mark and Mitch were Colorado state wrestling champs in high school. Despite being offered scholarships to other schools, including North Carolina, he chose to enroll into the University of Wyoming and walk on to their football team. After his freshman season, he was offered a full-ride scholarship and never looked back earning three all-conference team awards and the defensive MVP honors in the 2009 New Mexico Bowl. He graduated from college in 2010 with a degree in criminal justice. 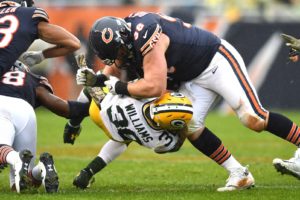 After college, he was not selected during the 2010 NFL Draft but was signed as an undrafted free agent by the Houston Texans but released before the end of training camp. Thinking his football career was over, he went home to Eaton where he worked cleaning out residential sewer lines. In October, he received a life-changing phone call from his hometown Denver Broncos who were interested in signing him to their practice squad where he spent the last 11 weeks of the season. In early 2011, he was signed to the active roster where he played in 60 games over the next four seasons, including an appearance in  Super Bowl XLVIII versus Seattle. He became very popular with the Denver fanbase and his No.96 jersey was one of the only non-starting player jerseys sold in the Broncos team store.

In 2015, he signed as a free agent with the San Diego Chargers and only saw action in two games before being released. He then signed on with the Chicago Bears where he spent the last three seasons. He’s had 24 starts in 95 career games totaling 125 tackles and 4.5 sacks. The 2017 season was his best yet finishing with 32 tackles and 2.5 sacks in 12 games. In fact, he was listed as the highest graded interior defensive lineman of 2017 according to Pro Football Focus.  The second highest rated player in that category was former Seahawk and current Viking Sheldon Richardson.

At 6’4″/300lbs, he’s listed simply as a defensive tackle. However, he adds versatility across the d-line. He’s had experience playing nose tackle, zero-tech, 1-tech, 3-tech and even 5-tech which is a defensive end in a 3-4 front. A former d-line coach referred to him as a “lunch pail player”  meaning that he comes in every day to work and does his job. He’s a self-admitted “blue collar”  player who learned his work ethic from his father Mike who worked as a “roughneck”  on an oil rig for nearly 50 years after graduating high school.

In his personal life, he’s married to Corey Cogdell-Unrein who is a two-time Olympic trap shooter and won a bronze medal at the 2008 Summer Games in Beijing. They met on a blind date in 2011 and were married three years later. They have now been married for four years and have no kids yet. Bucs fans can follow him on Twitter at @MitchellJUnrein  where he has nearly 23,000 followers. He also has a website at www.MitchUnrein.com where he supports a number of causes, including the CPFF or Colorado Professional Firefighters Association.

The Buccaneers have not only changed the personnel of this defensive line, they have changed the culture. Not only do all four free agent additions have versatility, but they have all played in a Super Bowl. Hopefully that winning attitude, experience, and work ethic will rub off on the rest of this young team and they will take that next step towards a playoff birth.

How the Bucs Can Get Back to the Division Championship

It's been a decade since the Tampa Bay Buccaneers won the NFC South and last made the post season. Since 2007, the Atlanta Falcons have won the division 3 times and made the playoffs 6 of the last 10 years....

So I'm sitting here watching "NFL Football Fanatic"  on the NFL Network. It's a show about a man from Scotland who travels around to various NFL cities and talks to fans, players and coaches, attends tailgates and takes part in...